Opioid overdoses have increased substantially in the last thirty years.  The opioid crisis has become the worst epidemic in the modern U.S. history. There are more deaths every year from opioid overdose than from gun related death or car accidents. The main culprits are heroin and fentanyl. The Centers for Disease Control and Prevention estimates the economic cost of opioid abuse to be $78 billion a year. This figure includes healthcare and substance abuse treatment costs, criminal involvement and lost productivity. 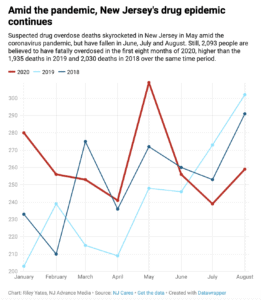 In 2019, in New Jersey, approximately 3,000 people died from opioid overdose. In the first eight months of 2020 2,090 people died, which is an eight percent increase compared to the previous year.

In 2019 there were 662 reported overdoses in the County. Naloxone,  commonly known as Narcan is an overdose drug reversal was used 336 times by the police. That same year, there were 149 overdose deaths.

When the police intervene in an overdose situation, individuals who overdosed on illegal substances are taken to jail. Fair Lawn Initiative was launched in 2018 as a pilot program. Instead of jail, they’re offered an opportunity to go to treatment for opioid abuse. In treatment, addicts will undergo detoxification, if needed and continue with various forms of treatment to help them overcome their addiction to opioids. The program has a success rate of 50%.

Please note that the program is sponsored by the Department of Human Services and may no longer be in effect.